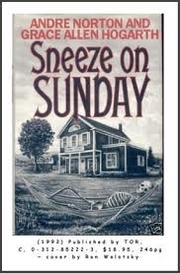 It's 1948, and Fredericka Wing, a librarian from New York, takes a summer job in South Sutton, Mass., running a bookstore and lending library for vacationing Lucy Hartwell. Fredericka's neighbors are the aristocratic Sutton family, who run an herb farm and laboratory overseen by widowed Margaret Sutton's niece Philippine, a French survivor of the Nazi camps. Margaret's high- strung daughter Catherine has returned to the farm after a failed marriage; Roger, a war-damaged son, and Lucy Hartwell's niece Margie help out with farm and lab. Fredericka has scarcely settled in when she discovers Catherine's poisoned corpse in her backyard. With new friend Colonel Peter Mohun and police chief Thane Carey, Fredericka strives heavily to solve Catherine's murder and another in its wake, her own life even at risk in a series of artificial dangers. A lifeless story weighted down with cardboard characters, stiff dialogue, a contrived plot, and a heroine given to the vapors. No fun at all.