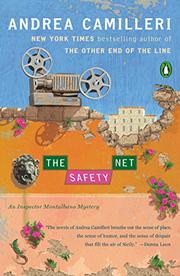 Murder, meltdowns, and a boisterous Swedish film crew bring chaos to a veteran police chief and his Sicilian community.

Inspector Montalbano has his hands full when a television crew from Sweden invades his bailiwick. To celebrate the linking of Vigàta with its sister city, Kalmar, Swedish TV is filming a movie about a romance between a Swedish girl and a “youth from Vigàta.” All this bustle is a nuisance to the world-weary Montalbano (The Other End of the Line, 2019, etc.), who coincidentally finds himself investigating an odd case that involves the cinema. Ernesto Sabatello has discovered a reel of film from decades ago: a collection of shots taken by his father, Francesco, once a year over a series of years. The boring film shows just a patch of wall, apparently unchanged year after year. Montalbano is intrigued, but it takes him quite a while to focus on this puzzle when distractions come in the form of a melee between Swedes and Sicilians and the need to referee the marital battle between his quirky detective, Mimì, and Mimì’s wife, Beba. This last becomes unexpectedly serious when Mimì attempts suicide. The discovery that Francesco had a twin brother named Emanuele, who apparently committed suicide in 1957, makes the case even curiouser. Montalbano’s attentiveness to Swedish visitor Ingrid and her blond bear sidekick, the director Gustav, puts a new wrinkle in his relationship with girlfriend Livia. Then another investigation concerning an incident at a school is added to his crowded plate. When disaffected teens emerge as the prime suspects, Montalbano fears for the state of the world.

Both darker and more absurd than previous romps, the latest Montalbano is a bracing cautionary tale.

THE PYRAMID OF MUD
by Andrea Camilleri
Mystery

A NEST OF VIPERS
by Andrea Camilleri