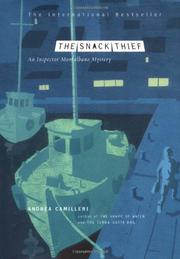 Bristly Sicilian police inspector Salvo Montalbano is roused from a sweet dream of his mistress Livia by a blaring telephone and the nervous voice of detective Catarella announcing a murder. The body of semi-retired businessman Palmisano Lapecora, uncharacteristically dressed to the nines, was found aboard the elevator of his apartment building by Giuseppe, a cocky security guard. Antonietta, the widow, peppers Montalbano with unusual questions. Most of the Lapecoras’ quirky neighbors don’t want to get involved, but they do let it be known that Lapecora was enjoying an ongoing affair with Karima, a beautiful young Tunisian whose skills include housecleaning and probably prostitution. As usual (The Terra-Cotta Dog, 2002, etc.), Montalbano’s path to a solution is complicated by amusingly incompetent coworkers and pesky distractions. Off the coast of Sicily, a crewman on an Italian fishing trawler is gunned down by a Tunisian patrol boat. Could the cases be related? Montalbano’s suspicion that Karima holds the key to his own mystery is confirmed when she disappears shortly after talking to him, leaving behind her sensitive young son, Francois. Even stranger, Livia unexpectedly volunteers to take care of Francois, and still more unexpectedly, displays a strong maternal instinct, something Montalbano has never seen in her before. And when her boorish male protégé Mimi offers to help Livia, Montalbano’s jealousy surprises himself. Along with his midlife crisis, these developments lead him to some genuine soul-searching.

After rambling a bit early on, the tale is enlivened and deepened by eleventh-hour surprises. Montalbano, blessedly, is as bitingly humorous as ever.