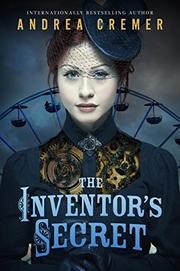 From the Inventor's Secret series, volume 1

Paranormal-romance queen Cremer (the Nightshade series) tries her hand at writing steampunk with an alternative-history twist.

The year is 1816. The British have won the Revolutionary War, enslaved the Americans, and turned Boston into a prison and New York City into a socially stratified power center. Giant, robotic Imperial Labor Gatherers and man-eating rats terrorize the population. A colony of teenage resistance fighters are hiding in a remote maze of caves in the New York Wilderness. Tomboy heroine Charlotte rescues a mysteriously invincible but amnesiac boy, nicknamed Grave, and brings him back to the Catacombs. The plot thickens when fellow rebel, tough guy Jack, turns out to be the disgraced son of an elite admiral who holds a powerful position in Empire society. Piloting the made-for-movies Dragonfly, a fanciful insectlike aircraft tricked out in brass and leather, Jack flies Charlotte and her companions to the multilayered Floating City. There, disguised as aristocrats and servants from the islands, the rebels attempt to infiltrate the establishment and solve the mystery of Grave. Charlotte’s steamy romantic intrigues with Jack and his Machiavellian brother dominate much of the action, leaving some plot details frustratingly opaque, including the titular secret itself. The cliffhanger at the conclusion of the novel clearly anticipates a sequel.

On balance, it’s an entertaining romp in a richly imaginative setting.