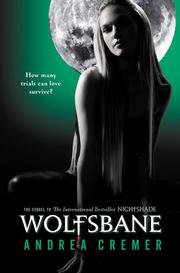 From the Nightshade series, volume 2

This second installment in the well-received Nightshade series puts 17-year-old alpha girl-wolf Calla into an alignment with her erstwhile mortal enemies, the Seekers, in an effort to save her pack and eventually the world.

This book picks up where the first ended, requiring familiarity with the earlier story and offering little explanation to new readers. Calla loves Shay, whom she rescued and transformed into a man-wolf in the first book. Yet she can’t abandon her fierce attraction to Ren, her intended mate, left behind in Vail, Colo., to suffer torture at the hands of the Keepers, the powerful beings who control the wolves. Worse, Calla realizes that the Keepers will destroy her wolf pack if she doesn’t save them with the Seekers’ help. With alliances decided and exposition of Calla’s new circumstances completed, Calla and the Seekers journey magically back to Vail to attempt a rescue of Ren and her pack. Cremer focuses this installment on plenty of action as the raid runs into trouble, referring only occasionally to her earlier theme of freedom. That battle does the job, however, along with the occasional hot-hot-hot sex scene, to keep readers hooked into the narrative. The series has plenty of oomph to continue beyond this story's cliffhanger. Fans will be satisfied and eager for the next installment.