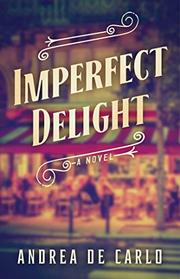 An aging rock star and the owner of a gelateria form an instant, unlikely connection in the south of France.

When Milena Migliari meets Nick Cruickshank, lead singer of the world-famous English rock group the Bebonkers, she isn’t looking for romance. In fact, she’s sworn off men and is living with a female partner, Viviane, with whom she’s preparing to start in vitro fertilization treatments. But Milena’s life is far from settled. She's a dreamer and fanatically devoted to creating exquisite gelato, which she sells at her own small gelateria. Viviane may not take Milena’s work seriously, but to her, it is an art. She finds a more receptive audience in the most unlikely of places: Nick Cruickshank, whose impending wedding has sent him into his own existential crisis. Under the strain of unwelcome guests and embedded tabloid reporters at his French estate, Nick becomes increasingly estranged from his fiancee, Aileen, a fashion entrepreneur. But after a few chance encounters with Milena—and her gelato—he finds himself transfixed. Frustrated by the commercial limitations on his own music, he recognizes Milena as a true original. But both Nick and Milena must choose between an instant connection and their pre-existing commitments and responsibilities. This latest novel by De Carlo (Primitive Heart, 2014, etc.) would have been more persuasive if the relationship between Nick and Milena had been more fleshed out. The novel gets bogged down in internal reflection and philosophical rumination, and as a result, the characters spend very little time together. Milena’s gelato creations are described in terms so mystical that they approach the absurd. Hard-core foodies will likely enjoy this meticulously researched and described element of the novel; others may be left cold.