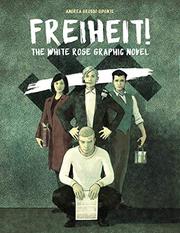 A graphic account of the lives and tragic ends of the young anti-Nazi White Rose martyrs.

Aside from dates, glimpses of documents, and a few invented lines of dialogue, Ciponte’s sketchy narrative text is largely a mix of quotations from classic German writers, Nazi propaganda, and snippets of rhetoric drawn directly from the six exhortatory leaflets (all of which are provided in full as backmatter in an English translation by Arthur R. Schultz) that the White Rose printed and distributed before its abrupt end. This leaves it to the art to create a storyline, and it’s not up to the task, being arranged in loosely sequenced panels, marked by confusingly abrupt changes in time and locale, in which watery figures with hard-to-distinguish features are either posed in static groups or portrayed in head shots. Reproductions of official reports serve in place of explicit depictions of the executions. Russell Freedman’s We Will Not Be Silent (2016) and Kip Wilson’s White Rose (2019) offer a more coherent picture of the short careers of Sophie Scholl and her fellow protesters, but readers will come away appreciating the courage it took for these young collegians to stand up as they did. Though the leaflets are almost unreadably cerebral, they do serve as primary sources for the White Rose’s message.

A heartfelt, well-deserved tribute but a muddle for readers not already familiar with the story.