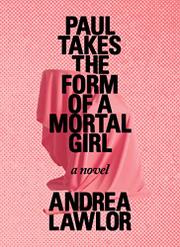 PAUL TAKES THE FORM OF A MORTAL GIRL

A magical, sexual, and hopeful debut novel about transcending boundaries of gender to pursue emotional connection.

Lawlor (Position Papers, 2016) writes of Paul, a shape-shifter tending bar in a college town in the mid-1990s. Paul can change his gender and appearance at will and does so as he navigates in and out of various pockets of academia and queer culture. Paul is drawn to the act of attraction; he “relied on his ability to attract only the sorts of attention he desired,” and he shifts his form as a way of constantly challenging himself to connect with more people. Paul wants access to as many circles and bodies as possible. Lawlor’s prose is taut, self-aware, and carnal. As Paul tests his “own nascent malleability,” the author explores appearance, attraction, sexuality, and identity. Paul’s youthful exuberance and thirst for hookups are foils to his persistent feelings of isolation. The book is divided into several parts, most notably shifting when a visit to a Michigan Womyn’s Music Festival leads Paul (as a woman) to both a great love, Diane, and a confrontation with his own reasons for seeking sex. “What was sex, but newness?” he asks himself. Eventually Paul has to decide on the level of intimacy he desires; specifically, who he wants to tell about his body. This suggests that intimacy is knowledge of an identity that transcends the corporeal form. Dispersed throughout the story are short chapters with the feel of legends, each fable hinting at issues of gender. In the final third of the novel, Paul moves to the Bay Area, tests the limits of his ability to hold a form, and does his most mature self-examination.

This is groundbreaking, shape- and genre-shifting work from a daring writer; a fresh novel that elevates questions of sexual identity and intimacy.