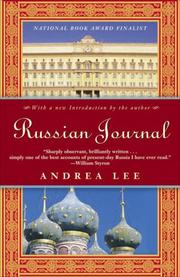 Fond, sometimes poignant vignettes of a recent ten-month-stay in the Soviet Union (parts of which have appeared in The New Yorker, and elsewhere)--unusual because they might once have been titled, with sunny insouciance, ""An American Girl in Russia."" Not that Andrea Lee is frivolous: eager and delighted and outgoing are more like it. She and husband Tom, a Harvard doctoral candidate and exchange student, were housed in Moscow State University's skyscraper dormitory; both knew Russian; she had a long attachment to Russian folklore--to ""fallen fortunes"" too, Tom chided her. And there are Baba Yagas to be seen, closet aristocrats to be met; there is also, everywhere, a craze for things American. (A good Communist, at a Leningrad costume museum, likens Americans to the costumes' pre-Revolutionary owners: ""They cast a spell--oh, a wonderful spell--and they must inevitably die out."") The Lees not only mingle easily, they have so many Russian friends--whose stories are a big part of the book's story--that one has a very Russian sense of a life lived in common. There is rebellious, ironic Seryozha--a throwback about to lose his spacious apartment through the denunciation of his ex-wife's parents (who want the apartment for themselves). Rima--a bustling, resilient conduit between foreigners and dissident artists (to support her surly, impecunious ex-husband, her young daughter, and her poet-fiance). Others with double or triple lives. And, briefly but memorably: notorious journalist/spy Victor Louis, ensconced with his wife in a posh country estate--""an island of European-style comfort and freedom which gives foreigners the momentary illusion of having left the Soviet Union."" In the book's longest sequence, Andrea covertly teaches English to Jews about to emigrate--almost none of whom knows anything about Judaism (and many of whom will never leave). There are other plunges into Soviet life--exuberantly, at a women's bathhouse (where one of the cavorting, suddenly-raunchy occupants shrieks ""We're hooligans""); and chillingly, at the May Day fireworks, patrolled by riot-control soldiers. It's a modest, engaging book--free of polemic or aspirations to portent.