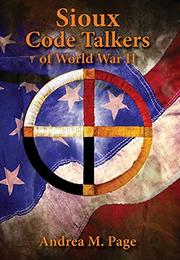 The role of Navajo Code Talkers in World War II is fairly well-known, but this informative book reveals the equally important contributions of Sioux Code Talkers who served in the Pacific theater.

Page, the great-niece of John Bear King, who served in the 1st Cavalry Division in the Pacific, chronicles the service of her great-uncle and six other members of Sioux nations who used their Lakota, Dakota, and Nakota dialects for a secure, reliable means of communicating important information on the battlefield. "By placing the Lakota Code Talkers in the battlefield and at headquarters," Page explains, "the seven Sioux Indians could converse freely in their native language in the radios without worrying about the Japanese decoding and intercepting the messages." Even if the Japanese tapped into lines, they would never understand the messages, as Lakota was virtually unknown to the outside world—thanks, ironically, to American attempts at cultural genocide. Page notes that the language was recorded in books, but the books were banned from schools in the early 1900s, so it was known only by a small number of scholars and people born and raised on the reservations. Page explores not only the importance of these soldiers to the war, but also their history, culture, and values.