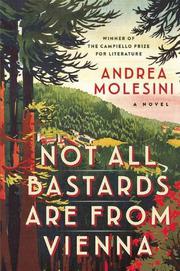 NOT ALL BASTARDS ARE FROM VIENNA

War and resistance, sexual awakening and shell shock, sacrifice and survival color the extreme coming-of-age of an Italian teenager experiencing the last year of World War I among the gentry in a small country town.

Humor overlays tragedy in Molesini’s impressively controlled, gently paced, ultimately piercing debut. The setting is the Villa Spada in Refrontolo, Italy, home to an aristocratic family—two grandparents; aunt Maria; 17-year-old orphaned grandson Paolo—and their servants. It’s 1917 and, with occupying German troops billeted in the town, atrocities have been committed: women have been raped; valuables looted. While the family attempts to maintain its role in the community, Paolo assists its steward, Renato, a member of military intelligence, in running missions, including rescuing a downed British pilot. Times are hard, food is short, and life is perilous, yet Molesini’s portrait of the community is delivered with a light, often wry touch. Grandma’s enemas are a weekly ritual and her enema bags a good place to hide valuables. The villa’s shutters and washing line are used to send coded messages. And Paolo’s adventures with Renato are matched, for thrills, by his sexual relationship with Giulia, a beautiful but unpredictable older woman. But tragedy gradually takes the upper hand. The German troops are replaced by Austro-Hungarians who, as the 1918 offensive begins, suffer devastating losses; and Paolo, assisting with the wounded and on a steep learning curve, eventually plays his own part in the historic proceedings. While Molesini can’t refrain from dropping plangent hints about the world that awaits after this war is over, it’s the tragic impact on the Spada family that the reader will remember.

Drawn in part from the true-life diaries of Maria Spada, this unusual novel, reflecting the war in microcosm, captures a turning point in the fates of empires.