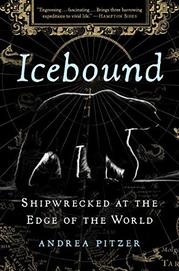 Shipwrecked at the Edge of the World

Biography/history of a 16th-century Dutchman who sailed courageously to the North Pole.

Pitzer, a journalist who last wrote a global history of concentration camps, draws on diaries, archival material, and her own three trips to the Arctic to recount, in exhaustive detail, three arduous journeys carried out by navigator William Barents in search of a northern route to the Far East. Barents was in his mid-40s, with a wife and five children, when, in 1594, he joined an exploratory fleet whose mission was part of the Dutch Republic’s effort to “transform their country into a world power.” The first expedition was successful: After traveling more than 3,000 miles, the fleet identified two possible routes to China, and every sailor returned home safely. The second expedition, though, had worse luck. The seven ships that sailed in 1595 constantly feared being trapped by ice; weathered violent storms; and battled polar bears, which attacked and ate two sailors. Morale plummeted, and the ringleaders of a mutiny were hanged. Barents’ third expedition, which set out in 1596, proved disastrous. “They’d sailed once more into merciless terrain without even basic strategies to survive in it,” Pitzer writes, and they became locked in ice, forcing them to overwinter in the Arctic. The author chronicles the crew’s daily experiences, hauling lumber for miles, dismantling their ship for planks, building a shelter, hunting for meat, and surviving temperatures that dropped to 30 degrees below zero. They were weakened and ill from scurvy and once poisoned themselves from eating bear liver. By the time they freed two small boats from the ice and sailed for home, several had died. Though Barents succumbed during the return and had found no northern route to China, he became legendary, leaving a legacy of determination and becoming “the patron saint of devoted error.” Although sometimes overwhelmed by repetitive detail, Pitzer’s narrative vividly conveys tension and terror.