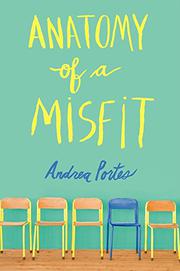 ANATOMY OF A MISFIT

Anika Dragomir, the third most popular girl at her high school in 1980s Nebraska, is pursued by two different boys, both off-limits to her, in a romance filled with seriously funny dark humor and tragedy.

When, toward the end of this unconventional novel, Anika realizes that she may have inherited her tendency toward mental imbalance from her loving and smart but eccentric mother, it’s an epiphany for her. It might not be similarly revelatory for readers, given the first-person window they’ve been given into her thoughts throughout. Nevertheless, Anika will already have won most of them over, even in the face of some questionable moral lapses, such as dosing her (albeit obnoxious and, it turns out, racist) boss’s coffee with Valium and pilfering money from the register. She worries that, inside, she’s “spider soup,” but it’s clear that Anika’s a good soul, though she’s terrified of her supposed friend, the most popular girl in school. This fear is the reason that she stays quiet about her developing relationships with both reformed outcast Logan, who deals with a paralyzing, sad home life, and the wildly charismatic but possible player Jared. Chapters interspersed that describe Anika pedaling furiously on her bike toward a clearly horrific outcome will brace readers from the start, but this foreshadowing does little to soften the emotional punch of the conclusion.