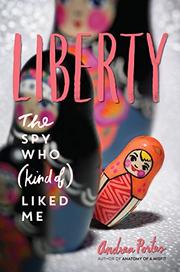 The Spy Who (Kind of) Liked Me

If your journalist parents are dead—or “probably dead”—why not become a spy and an assassin?

On their way from Istanbul to Damascus, Paige Nolan’s parents disappeared amid gunfire at a checkpoint. Since then, the white, fashion-conscious, pop-culture–savvy protagonist has gone on to matriculate at Bryn Mawr, where she leads the sexually independent and alcohol-misted life of a typical college student. Dear reader, as Paige addresses “you” directly, you know that an even greater life-changing event happened at an Applebee’s restaurant. She used martial arts to disarm two guys toting AK-47s, but due to her dissociative disorder, she witnesses her actions as if outside her body and shrugs off the event. But officials (and perhaps Lord of the Rings fans) at the Reconnaissance and Intelligence AuTHority discover and recruit Paige for an information-gathering mission. In exchange for uncovering secrets of Sean Raynes, an American superhacker and whistleblower now gone to ground in Russia (akin to Edward Snowden), her parents’ case will become active. After quick training, Paige assumes the role of an exchange student at Moscow State University. The young RAITH operative navigates Russian secret agents and contacts in the mob with fast-paced action and biting wit—and perhaps while falling in love with Raynes in the process. An open ending leaves room for sequels.