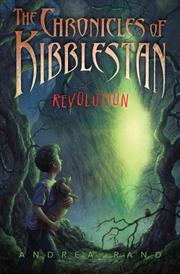 From the The Chronicles of Kibblestan series, volume 1

A young boy and his loyal dachshund get lost in an extraordinary world of oppressed, strange creatures in the first volume of debut author Rand’s middle-grade fantasy series.

Eleven-year-old Ellis Garcia’s campout with his Vulture Voyager troop isn’t all it’s cracked up to be, especially since his dad, Javier, couldn’t be there—a fairly common occurrence, as Javier’s ice cream shop keeps him busy. Later, after a heated argument with his father, Ellis runs off into the woods with his timid, fearful dog, Philecia. After they lose their way, they’re soon joined by a frightened mouse named Matilda, who can speak—and so, too, can Philecia, rather suddenly. They follow the only visible light, which takes them to the land of Kibblestan, where they wind up battling slime that’s flooding the grounds. Ellis saves a drowning, toddler-sized Petikin named Jenkins who claims that monstrous Snotlins attacked, covering the land in slewedge. The small group joins other refugees, who are already in a cramped habitat. Evidently, Fandrella, the Snotlins’ ruler, is more controlling than most Kibblestan citizens are used to. As Jenkins searches for his missing family—including his father, who disappeared long before the Snotlins’ slewedge assault—others confront baddies such as “chatzkies,” vicious Chihuahua-like animals with needle teeth. But if Ellis can unite the citizens, they may stand a chance against Fandrella. The author’s names for her characters are revealing—smug, lazy Brattley is indeed a brattish Petikin—and readers will easily guess the origin of the Snotlins’ slewedge. The book’s overall political theme, though, might have benefited from a bit more subtlety, as in a scene in which Ellis maps out a clearly superior democratic government. But Rand still serves up moral lessons with finesse: Philecia, for example, is in desperate need of courage, and Ellis realizes that his problems at home pale in comparison to those of citizens fighting to retain their homes. There are some comic morsels, as when Ellis declares Philecia to be a slightly more exotic-sounding “weinerdach,” and some genuinely daunting creatures—the chatzkies sink their teeth in and don’t let go, which leads to a few bloody moments but nothing excessive.