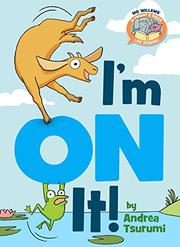 A frog tries to do everything a goat does, too.

Goat asks Frog to look at them before declaring “I’m ON it!” while balancing atop a tree stump near a pond. After an “Oooh!” and a “You know what?” Frog leaps off their lily pad to balance on a rock: “I’m on it, too!” Goat grabs a prop so that they can be both “on it AND beside it.” (It may take young readers a little bit to realize there are two its.) So does Frog. The competition continues as Frog struggles to mimic overconfident Goat’s antics. In addition to on and beside, the pair adds inside, between, under, and more. Eventually, it all gets to be too much for Frog to handle, so Frog falls into the water, resumes position on the lily pad, and declares “I am OVER it” while eating a fly. In an act of solidarity, Goat jumps in, too. In Tsurumi’s first foray into early readers she pares down her energetic, colorful cartoon style to the bare essentials without losing any of the madcap fun. Using fewer than 80 repeated words (over 12 of which are prepositions), the clever text instructs, delights, and revels in its own playfulness. Color-coded speech bubbles (orange for Goat, green for Frog) help match the dialogue with each speaker. Like others in the Elephant & Piggie Like Reading series, Elephant and Piggie metafictively bookend the main narrative with hilariously on-the-nose commentary.

Whether in hand or on shelf, this one’s sure to make a splash anywhere and everywhere.