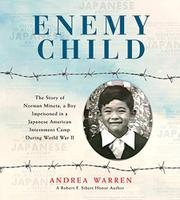 The Story of Norman Mineta, a Boy Imprisoned in a Japanese American Internment Camp During World War II

An encompassing look at Norman Mineta, the first Asian-American to serve as mayor of a major American city, a Congressman, and Secretary of Commerce and Transportation under George W. Bush.

Mineta is a Nisei, a second-generation Japanese-American, born in San Jose, California. Writing efficiently with concise descriptors, Warren narrates in the third person, focusing primarily on the family and social environment of Mineta’s school-age years. Warren starts with Mineta’s father and his immigration to the U.S. for work. He wisely became fluent in English while working in the fields, later establishing his own insurance business, enabling him to give all five children great educational opportunities. Their lives are quickly disrupted by World World II. Mineta now 11, his parents, and most of his much-older siblings are sent to an assembly center in Santa Anita, California. Eventually they end up in Heart Mountain War Relocation Center, Wyoming. The experience drives Mineta to later pursue politics and to introduce the Civil Liberties Act of 1988, offering camp survivors restitution and a formal apology from the government. Warren includes anecdotes of white allies, including a chapter about Alan Simpson, a childhood acquaintance and later a political ally of Mineta in Congress. Pronunciation guides to Japanese are provided in the text. Archival photographs provide visuals, and primary-source quotes—including racial slurs—contribute historical context. No timeline is provided.

Written straightforwardly, it’s not the most engaging read, but it is an invaluable record of an incredible life.