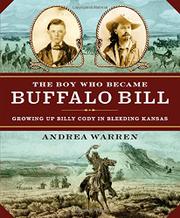 THE BOY WHO BECAME BUFFALO BILL

Warren explores how the man who became the most famous entertainer of his time and a legend of the "Wild West" grew up amid a violent regional conflict that would soon tear apart the nation.

William Cody was 8 when his family moved to the Kansas Territory in 1854, soon to be plunged into a bloody conflict between anti-slavery and pro-slavery factions. When his father died from complications of a savage attack after delivering an abolitionist speech, 11-year-old Billy supported his family herding cattle, working on wagon trains, and riding for the Pony Express. Seeking revenge, he joined the Jayhawkers, guerrilla irregulars fighting pro-slavery militant groups. He enlisted in the Union Army during the Civil War and later worked as a scout during the Indian Wars. Providing contextualizing information along the way, Warren chronicles all these colorful adventures in lively prose but, perhaps due to her focus on his early years, gives short shrift to Cody's contradictions. He earned his nickname for single-handedly slaughtering thousands of bison yet feared their extinction and spoke out against hide-hunting; that selfsame slaughter was part of a U.S. government campaign to destroy Plains Indian culture, yet Cody hated how the Indians were treated—both of these are largely unexplored. The volume is liberally illustrated with archival material, and extensive backmatter supplements the narrative.

A well-researched, engagingly written, though incomplete portrait of a fascinating, complex figure.