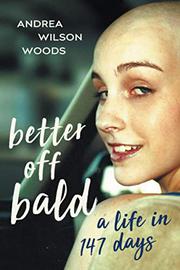 A teenager diagnosed with terminal cancer lives life to the fullest in this debut book.

Adrienne was 15 years old when she was diagnosed with an incurable form of liver cancer. She had been attending the Coachella music festival to see her favorite band, Jane’s Addiction, and returned complaining about severe pain beneath her right rib. Woods, her sister, who narrates this work, showed little sympathy, at first blaming her sibling’s discomfort on excesses at Coachella. When Adrienne visited a clinic, a concerned doctor suggested an immediate referral and tests. A physician’s subsequent diagnosis—stage 4 hepatocellular carcinoma that had metastasized to Adrienne’s lungs—was received with shock and disbelief. After discussing Adrienne’s chemotherapy schedule, Woods calculated that her sister had “at best…six to eight months to live.” Adrienne, who had previously suffered from bouts of depression, seized this opportunity to live life to the maximum. She attended The Tonight Show and afterward met Jay Leno and, more importantly, her idol, guitarist Dave Navarro, whom she saw again on her Make-A-Wish day. The format of the work, an account of the 147 days from Adrienne’s first symptoms to her death, places a poignant emphasis on the importance of each fleeting moment. Adrienne’s voice is one of powerful, teenage defiance. An excerpt from her journal reads: “Every fucking moment after this cancer is dead I am going to be alive.…I’m going to theme parks and swimming pools, taking hiking trips and camping adventures.” The bulk of the narrative, provided by Woods, is emotionally controlled and concise—remaining candid but with no particular flair: “That night is the first time I pray about the cancer. It’s hard to pray to an entity you don’t believe in.” Despite its slightly unconventional format, this volume offers little else to set it apart from others of a similar nature. Adrienne’s journal entries are sufficiently stirring to motivate others facing terminal illness to seize the day but make up only a fraction of the book. Illustrated with family photographs throughout, this memoir/biography is deeply sad with inspirational flashes.