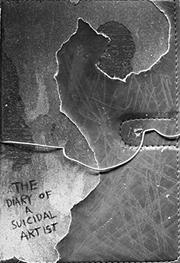 THE DIARY OF A SUICIDAL ARTIST

The raw, sinewy memoir of a wild mind at work.

It can be a tough task reviewing someone’s personal diary that they’ve released commercially. This book, for instance, offers no real context up front other than the title. Pfundt only reveals his name randomly in the text, which is made up of photocopied pages from a handwritten journal featuring hand-drawn illustrations. It does not appear to be edited for publication. Inky black drawings feature people, crosses, and, in some cases, just scribbles. “Long Live the Spiral,” one page screams, while another just repeats, “I want to die.” Large sections are blacked-out, words the author has evidently decided against. Sometimes it seems the pages have been partially burned; in one case, it is explained that several smudges were made with the author’s blood. Pfundt starts by talking about how he learned something new about himself: he was trying to be someone else. “Why can I not just be me?” he asks. Readers are privy to the author’s direct, personal thoughts as he recalls trying to become a filmmaker and a video game designer while dealing with sex and love, grappling with his feelings for his family, discussing philosophy, and trying to chase away depression. Words are often misspelled. Drawings are usually fairly primitive. It has the earnest, childlike feel of Daniel Johnston’s work, but anyone who thinks this might be a tongue-in-cheek sendup of artists will be disappointed. It rambles, it’s beautiful and harrowing at turns, but there’s no real narrative cohesion, and it’s unclear to whom the book is directed. Then again, the author notes at one point that life doesn’t necessarily have clear goals, other than staying alive, and his prose follows that philosophy. These are the inner workings of a mind struggling to stay alive and figure out what it’s supposed to be doing. As the author admits, this intensely personal, nontraditional work could appeal most to kindred spirits who might take comfort in and appreciate unfiltered thoughts.

Unvarnished lens looking at a troubled man’s life—there’s little to nothing like it out there.