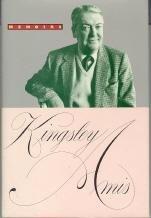 Amis's "autobiography"--or, more accurately--portraits of his acquaintances after a few opening chapters on his family, school days, and life at Oxford. Aside from the fact that "most writers lead dull lives," Amis says his holding hack saves pain: "To publish an account of my own intimate, domestic, sexual experiences would hurt a number of people who have emotional claims on me...and I have no desire to cause pain, or further pain, to them or myself." What that leaves Amis with is other people and his opinions, which he records in a daily stint of space-filling, all quite styleless for a respected comic novelist who has just had a hit on American TV with his script for The Green Man. He gets off to a great start, describing his father, who manufactures "unbreakable" glassware (if dropped on something besides a carpet, a plate or glass exploded like a hand grenade), and his paternal grandmother: "Mater was a large dreadful hairy-faced creature who lived to be nearly ninety and whom I loathed and feared...." Others he limns include Francis Bacon, Anthony Powell, Anthony Burgess, Roald Dahl, Malcolm Muggeridge, Margaret Thatcher, actor Terry-Thomas (a brilliant Bertrand in the film version of Lucky Jim, Amis's most famed novel), Lord Snowdon, Arnold Wesker, and many others. At times, as with Wesker, Amis paints a portrait with victorious, if not vicious, brevity--but his portraits of Robert Graves and several others are no reason to read this book. The writer's best moments are on Philip Larkin (rewritten from a version published before Larkin died), and his standing up for neglected writers, such as Elizabeth Taylor, and for Powell's A Dance to the Music of Time series. A special chapter on booze, quite funny, goes nowhere. Depthless, but the pace and variety will keep many awake.
Pub Date: Sept. 1st, 1991
ISBN: 0-671-74909-9
Page count: 352pp
Publisher: Simon & Schuster
Review Posted Online: June 24th, 2010
Kirkus Reviews Issue: Aug. 1st, 1991

THE OLD DEVILS
by Kingsley Amis