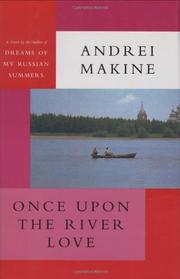 ONCE UPON THE RIVER LOVE

A 1994 novel by the Russian-born author whose Dreams of My Russian Summers (written, as was this, in French) was rapturously reviewed when it appeared here in translation last year. The adolescence of three friends who grow up together in the village of Svetlaya in eastern Siberia is recalled by one of them: Dmitri, an ineffably romantic youth who will leave Svetlaya for the Leningrad College of Cinema. His boyhood companions are Samurai, a burly pragmatist who narrowly escaped sexual assault when he was ten and became thereafter “obsessed by strength,— and Utkin, a quiet boy crippled by a shifting ice floe on the nearby Amur River, the name of which evokes that of the Roman god of love, and which accordingly looms, symbolically as well as literally, as a powerful sensual presence surrounding the friends. For this is a novel drenched in sensuality: Dmitri’s initiation by a “red-haired prostitute” in a neighboring town haunts his tentative approach toward manhood and independence, just as the glamour of “the Western World” beckons the three comrades, who travel many miles on skis to the Red October Theatre for repeated viewings of movies starring their idol Jean-Paul Belmondo (“He embodied this whole complex repertoire of adventures, colors, passionate embraces, roars, leaps, kisses, breaking waves, musky scents, brushes with death”). If some elements of the story—such as the presence of an old woman named Olga who tells stories of her youth decades before in Paris—too closely recall Dreams of My Russian Summers, it is nevertheless notable for its deeply understanding portrayal of youth as a time of herculean hungers and unlimited possibilities, and for a rich profusion of arresting images: the Trans-Siberian Express swiftly passing through Svetlaya; the body of a man found frozen in the crotch of a tree; the imprints of two naked bodies preserved in the snow. Marginally less wonderful than Dreams, but that’s quibbling. Let’s have Makine’s other fiction in English as soon as possible, please.