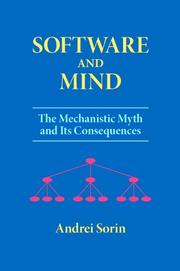 The Mechanistic Myth and Its Consequences

In this massive philosophical treatise that crosses disciplines with verve and meticulous logic, politics, cognitive science, software engineering and more become threads in a complex examination of mental modeling.

Sorin argues against what he labels the “mechanistic myth”: the belief that virtually all fields, from psychology to biology, can be addressed by pursuing methodologies and theorizing based on hierarchical modeling—a method of breaking down processes and concepts from high-level ideas into simple, indivisible base units or concepts. Although Sorin’s primary expertise and focus for the book is in programming and computer science, he convincingly argues that the success of hierarchical structures has spread from the hard sciences of physics and engineering—where, in Sorin’s estimation, these models work and should be utilized—to virtually all fields of study, including sociology and psychology, in which the processes and concepts involved appear to be too complex for the relative simplicity of hierarchical modeling. Since these fields study human interactions, which function on multiple levels and can vary depending on numerous factors, Sorin argues that the important concepts and theories in these so-called “soft” sciences cannot be adequately modeled or understood using hierarchical thinking. From this basic concept, Sorin broadly examines what he sees as troubling trends in academia, software development, government and many other endeavors. Early on, Sorin betrays the color of his conclusions through frequent use of emotionally charged words (e.g., absurd, charlatans, totalitarianism) and disdain for the majority of those working in the mechanistic mode, focusing especially on academic bureaucrats and those who, in Sorin’s opinion, work with pseudoscientific theories, such as linguist Noam Chomsky’s theories regarding universal grammar. To be fair, Sorin offers a disclaimer in his critique of the “mechanical myth”: “Myths,” he says, “manifest themselves through the acts of persons, so it is impossible to discuss the mechanistic myth without also referring to the persons affected by it.” His clear disapproval of these groups and theories doesn’t detract from the thorough explanations, well-reasoned arguments and crystalline logic he employs at every step. His explanations of mechanistic vs. nonmechanistic models and of the importance of tacit knowledge (meaning knowledge that is gained by experience, which isn’t always expressible in simple ways) are particularly cogent, and his textbook-length elucidations will enrich understanding for university-level students in various fields of study.

Despite moments of personal distaste, Sorin’s concise arguments stand as a model of reason.