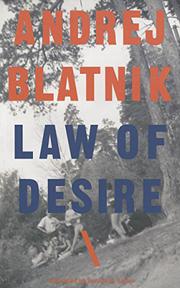 A clutch of brusque, seriocomic and sometimes forbidding tales about lust, loss and betrayal by the Slovenian author (You Do Understand, 2010).

Each of the 15 brief stories in this collection tends to be restricted to two people involved in conflicts that are either familial or romantic. In “Electric Guitar,” a teenage boy lives in terror of his abusive father until his effort to electrify his accordion provides a serendipitous if mordant solution to his plight. In “Total Recall,” a woman ponders getting back at the man who rejected her by spreading a rumor that he has AIDS. And in “What We Talk About,” a man and woman conduct a brief and awkward flirtation away from their significant others, until the tryst turns violent. The general theme here is that people tend to be punished for pursuing their desires, an idea Blatnik can turn into fablelike comedy, as in “A Thin Red Line,” in which an explorer studying human sacrifice turns out to be an example of it. Or Blatnik can be harrowing and blunt with the theme, as in “No,” a two-page sketch that presages a rape. Blatnik is inventive at imagining a breadth of conceits that work within his narrow tonal range (darkly comic or just plain dark), though the more interior the story, the less successful it is: “Bastards Play Love Songs” is little more than two friends ruminating on the Rolling Stones and love gone wrong, and “When Marta’s Son Returned” is a thin sketch about a PTSD-stricken soldier’s return home. Contrary to the way the flash fiction of You Do Understand thrived on its exceedingly narrow constraints, these stories improve as they expand. The best of the batch, “Closer,” features a man struggling to explain his separation to his young son, and each distant phone call makes his isolation all the clearer.

Taut storytelling, if sometimes a bit too high-strung.