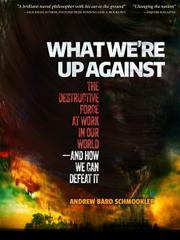 What We're Up Against

A political writer and former Democratic Party congressional candidate endeavors to galvanize America’s liberal left by illustrating how the Republican Party has become a destructive force.

Schmookler (Debating the Good Society, 1999, etc.) presents what he sees as a nation in crisis—a country careening under the harmful influence of the Republican right wing, unprotected by a liberal America unwilling to acknowledge they are in a fight between good and evil. Nothing better crystallizes this than the 2014 elections, he says, in which a contrarian, disruptive Republican Party was rewarded with greater political control. The weak challenge from the Democrats, he asserts, comes from their basic unwillingness to acknowledge and vocally confront the right wing’s orthodoxy of “brokenness”—the hallmark, he says, of an evil force that lusts for wealth and power, pursues conflict, and relies on dishonesty to divide and influence others. Upon realizing this, Schmookler says, liberals will be able to embrace their role as a force for good and press back against the machinations at work in the government; to that end, he draws comparisons to conflicts in pop-culture narratives, such as the 2009 film Avatar, the Star Wars series, and The Lord of the Rings saga. Noting what he sees as similarities between today’s political climate and those during the American Civil War and the rise of Nazism in Germany, the book illustrates how groups thrived on spreading brokenness, and how they spread destruction until people stood up to them. Overall, Schmookler’s book is intellectually informative and socially eye-opening. He cites many of his own, earlier writings on politics and social evolution, offering ways to identify what he sees as evil through the upheaval and anarchy they cause, so that readers may meet them with absolute, moral truths. However, the text is quite dense and often necessarily repetitive when exploring some of its more abstract ideas. It more often seems to be aiming to inspire readers, rather than suggest concrete actions. Other sections, such as the “Interlude” chapters, seem self-indulgent, as the author expresses anxieties over sharing his message and speculating on its success.

A political treatise that focuses on empowering readers with its ideas.