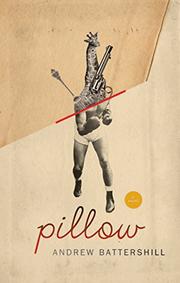 A punch-drunk enforcer for a small-time crime syndicate tries to pull off a getaway score when his on-again, off-again girlfriend gets pregnant.

Battershill, co-founder of the literary indie Dragnet Magazine, tries to paint his debut novel with a patina of literary affectation that it really doesn’t need given the quality of its storytelling and the author’s offbeat sense of humor. At its heart, it’s a coy crime novel about a thug named Pete, known to friends and foes alike as Pillow. The former boxer has taken way too many blows to the head, but he still has a gentle soul, levying his affections on animals in the zoo. But Pillow’s condition has forced him to retire in his mid-30s to eke out an existence as muscle for crime boss André Breton. (Those of you with a classical education just pricked up your ears, recognizing that Pillow’s eccentric boss is named and apparently modeled after the founder of French surrealism). “Ah Pillow, adding that touch of kindness to sweeten the scene,” Breton says. “You are a man of the living theatre. An idiot savant of pathos.” Some of the book’s other villains include the morphine addict Antonin Artaud (modeled on the French dramatist), Louise Aragon (after the poet Louis Aragon), and characters based on transgressive writer Georges Bataille and cubism defender Guillaume Apollinaire. When a coin exchange guarded by Pillow goes wrong, Louise is killed and the beleaguered boxer is partnered up with one of Breton’s hired killers to find the coins. But when Pillow’s whimsical girlfriend, Emily, turns up pregnant, Pillow decides to play both sides against the middle in a desperate play to get away clean with both Emily and the coins. It’s a strange mix of poetic license, brusque humor, and simmering violence that may appeal to crime and mystery fans looking for something a little more out there and give a little kick to readers with a philosophical bent.

A darkly humorous novel about a boxer with some fight in him.