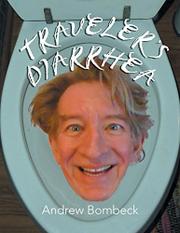 “I’m not a real writer. A real writer I am not….The last thing I wrote of substance was a play I made my fifth-grade class perform,” says debut author Bombeck in an opening author’s note. This statement, coupled with an inexpertly presented shot of the author’s face grinning manically from inside a toilet bowl, should prepare readers for the tongue-in-cheek work that follows. Drawing on journals written in the 1980s, Bombeck promises “True travel stories guaranteed to cause abdominal cramps, nausea, exploding stools, and occasional bloating.” The book’s six chapters, illustrated with photographs, cover an impressive amount of territory, including a 90-day trip around the world that Bombeck took in 1981, during which he visited Honolulu, Tokyo, New Delhi, Rome, and Paris. He also chronicles his time in the Peace Corps in Liberia in 1982, along with other journeys through North Africa, India, and on the Inca Trail in South America. The focus of many of Bombeck’s anecdotes centers on a desire to forge relationships with the opposite sex. In a remembrance of a trip to Western Samoa, he writes, “I was a lonely man who’d do or say anything to meet a beautiful woman”; he proceeded to take a photograph of a local posing “like a Vanity Fair model,” so that he could brag to his friends about his “make-believe” girlfriend. The accounts also display a fascination with all things scatological. While recalling Calcutta, Bombeck notes that “Most toilets in India are squat toilets with foot imprints showing exactly where to stand to piss and poop. Even with the imprints, I miss the target!” Later, he writes of having diarrhea in an elevator in Vienna: “Against all instincts, I couldn’t hold it, and everything exploded inside my pants!” Some readers will find this approach to be crude and childish in tone, but others will split their sides with laughter. The humor is generally affable, although Bombeck’s use of the term “spaz” may cross a line of acceptability for some. Overall, this collection of travel stories doesn’t rival Bill Bryson’s, although some asides are amusingly absurd.