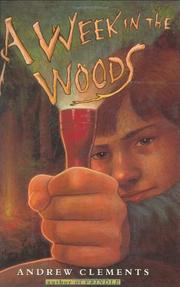 A WEEK IN THE WOODS

Playing on his customary theme that children have more on the ball than adults give them credit for, Clements (Big Al and Shrimpy, p. 951, etc.) pairs a smart, unhappy, rich kid and a small-town teacher too quick to judge on appearances. Knowing that he’ll only be finishing up the term at the local public school near his new country home before hieing off to an exclusive academy, Mark makes no special effort to fit in, just sitting in class and staring moodily out the window. This rubs veteran science teacher Bill Maxwell the wrong way, big time, so that even after Mark realizes that he’s being a snot and tries to make amends, all he gets from Mr. Maxwell is the cold shoulder. Matters come to a head during a long-anticipated class camping trip; after Maxwell catches Mark with a forbidden knife (a camp mate’s, as it turns out) and lowers the boom, Mark storms off into the woods. Unaware that Mark is a well-prepared, enthusiastic (if inexperienced) hiker, Maxwell follows carelessly, sure that the “slacker” will be waiting for rescue around the next bend—and breaks his ankle running down a slope. Reconciliation ensues once he hobbles painfully into Mark’s neatly organized camp, and the two make their way back together. This might have some appeal to fans of Gary Paulsen’s or Will Hobbs’s more catastrophic survival tales, but because Clements pauses to explain—at length—everyone’s history, motives, feelings, and mindset, it reads more like a scenario (albeit an empowering one, at least for children) than a story. Worthy—but just as Maxwell underestimates his new student, so too does Clement underestimate his readers’ ability to figure out for themselves what’s going on in each character’s life and head. (Fiction. 10-12)