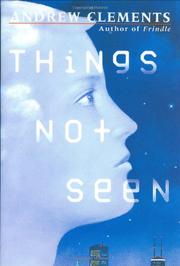 Clements (The Jacket, above, etc.) looks beyond grade school for the first time with a multifaceted rumination on selfhood and various forms of invisibility. Fifteen-year-old Bobby wakes up invisible one morning. His equally flummoxed parents, quickly grasping the personal and social dangers should the news get out, urge him to hole up at home. But boredom, worry, and the mutinous thought that he should have some say in the matter soon lead him into a string of adventurous outings, both wrapped up Invisible Man–style, and stark naked. Clements cranks up the stress with an ensuing traffic accident that puts both parents into the hospital, and, as weeks pass, the increasingly persistent attentions of the governmental child-welfare machine. He also provides a needed confidante for Bobby in Alicia, a teenager blinded by a head injury two years before and no stranger herself to that sense of being unseen. Both feeling angry, scared, and vulnerable, their relationship gets off to a wonderfully tumultuous start, but builds on a foundation of caring and loyalty into something solid enough to survive Bobby’s final return to visibility. As always, Clements’s genius for developing credible plot lines (even from oddball premises) makes suspension of disbelief no problem. His characters, each one fundamentally decent—there is never a chance that Bobby will go the way of the transparent voyeur in Cormier’s Fade (1988), for instance—are easy to like. A readable, thought-provoking tour de force, alive with stimulating ideas, hard choices, and young people discovering bright possibilities ahead. (Fiction. 11-15)