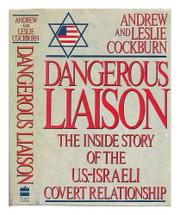 The Inside Story of the U.S.-Israeli Covert Relationship

A critical, impressively researched history of US-Israeli relations by Andrew (The Threat: Inside the Soviet Military Machine, 1983) and Leslie (Out of Control, 1987, not reviewed) Cockburn. Coming in the wake of the Gulf War, the Intifada, the Pollard espionage debacle, and the Bush Administration's somewhat revisionist attitude toward Israel, the authors' study is more than timely. Beginning with a brief, unsentimental version of Israeli history that has little in common with the establishment line, the two outline the forces, attitudes, and personalities that shaped the creation of that country and its formidable intelligence service, Mossad. From this grows the carefully crafted thesis that Mossad's most significant achievement has been the development of an enduring entente with the US via intelligence rather than conventional channels, the whole conceived by the legendary Reuven Shiloah and accepted by David Ben-Gurion. The authors also contend that rather than avoid the use of diaspora Jews in the gathering of intelligence, Mossad has heavily and successfully relied on them, as in the case of the Pollards. The direct connection between the Lehi terrorist group, the assassination of Count Bernadotte (instrumental in getting Jews out of Europe in WW II), and Shamir is explicated in detail, along with an Israeli entrepreneur's involvement in supplying Chinese ballistic missiles to Saudi Arabia. Current Israeli cat's-paw activities on behalf of the CIA and involvement in US domestic affairs, including presidential elections, are also revealed, with somewhat less perspective. This is no thrown-together post-Gulf product, but an unflinching, fact-packed, closely reasoned exploration of our relations with our strongest ally in the Middle East.