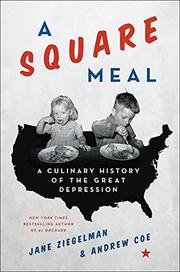 A Culinary History of the Great Depression

A history of the struggle to put food on American tables during the Great Depression.

“Food, like language, is always in motion, propelled by the same events that fill our history books,” write culinary experts Coe (Chop Suey: A Cultural History of Chinese Food in the United States, 2009) and Ziegelman (97 Orchard: An Edible History of Five Immigrant Families in One New York Tenement, 2010). By using food as a unifying theme, the authors give a fresh slant to the familiar but complicated history of one of America’s most difficult eras. They deftly connect food to science, technology, and commerce as well as political, cultural, and social movements, assembling a thought-provoking mix of personal stories, statistics, and historical events. After the 1929 crash, President Herbert Hoover claimed “business was on sound footing” while New York City breadlines served 85,000 meals per day to the destitute from all levels of society. A domino effect of unemployment and hunger spread across the nation, exacerbated by droughts and floods. “The poor and how they should be treated,” and who is “deserving” and “undeserving” in the hierarchy of food distribution were questions that were part of a national conversation that resonates today. The fear that providing food for the hungry would destroy any incentive to work hindered relief efforts as presidents Hoover and Roosevelt approached the juggernaut of feeding a nation from opposite ends of the political spectrum. As jobs and farms dried up, people were on the move looking for work and sustenance. Menus, recipes, and first-person accounts of folks struggling to get a meal put readers at the heart of the crisis. Among the heroes was an army of professional women from the Bureau of Home Economics who sallied forth armed with budgetary and nutritional advice, determined to educate masses of women on cooking methods, low-cost balanced diets, gardening, and new kitchen technology. Their efforts influenced the culinary arts for decades to come.

A highly readable, illuminating look at the many ramifications of feeding the hungry in hard times.