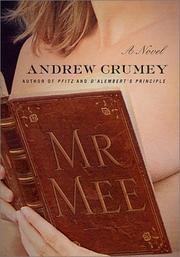 The playful preoccupation with alternative realities that dominated Scots author Crumey’s previous fiction (including Pfitz, 1997, and D’Alembert’s Principle, 1998) also informs this richly amusing novel about the search for an 18th-century encyclopedia that supposedly disproves the existence of the universe. Crumey’s wonderfully obsessive characters include the crotchety title figure (an elderly book collector), the lissome “life-scientist” who acquaints him with the world outside books, a perceptive college teacher of French literature, and a pair of bachelor copyists (and autodidacts—who are dead ringers for Flaubert’s ineffably pompous Bouvard and Pécuchet). Rattling back and forth between two centuries, this agreeably serpentine tale speaks volumes about the folly of scholarly preoccupation and the unreliability of received wisdom, while never neglecting to entertain the bedazzled reader. Borges and Calvino would have approved.