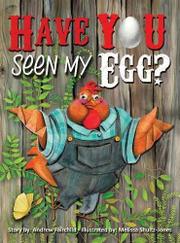 HAVE YOU SEEN MY EGG?

A resolute rooster decides to adopt an egg in this illustrated barnyard tale.

Red the rooster wakes up one morning from a repeated dream: he’s sure he’s meant to have an egg. The hens consider him ridiculous: “When will you give up this crazy idea?” Roosters, they tell him, “don’t have eggs!” Dejected, Red walks away, but he talks himself into a quest to find his egg. First, he looks in the garden. No egg there; the valiant Rabbit tries to give him a tomato instead. Frog looks in the pond, but only discovers a pebble. Cat, dressed like a fairy princess complete with a beribboned wand, helps Red survey the barn. When they spy a ball of yarn, Owl gets involved, but merely repeats the wisdom of the hens: roosters don’t have eggs. Still, Red is so determined to succeed that he walks out into a storm. There, in a stream in a ditch, he sees an egg floating with the current. Even though he can’t swim, he fearlessly rescues the egg, bringing it home. The play against gender expectations, in which Red, a male, is devoted to locating and caring for his own egg, is charming, and a nice inspiration for all young readers drawn to nurturing, even if they’re told otherwise. But Fairchild’s (Rose and Her Amazing Nose, 2015) plot hangs together loosely, with the egg appearing suddenly and for no reason. Young critical thinkers would be wise to wonder what is in the egg that Red has saved, and to notice that he misses his morning responsibilities to look after it. Many children, however, will just be charmed by debut illustrator Shultz-Jones’ delightfully designed farm animals, including the Owl in dinosaur footie pajamas.

An animal fable—with beautiful watercolor images—about following your dreams when others tell you to quit that never quite delves into the consequences.