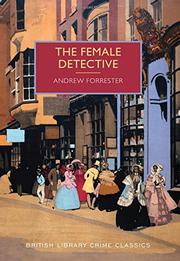 The latest reprint in the British Library Crime Classics is one of the earliest: a cycle of stories about a London detective first published in 1864, here introduced by Alexander McCall Smith, who ventures general remarks about female detectives, and Mike Ashley, who supplies some uncommonly informative historical background.

Even her closest friends think she’s a milliner, but Miss Gladden—not her real name, but “the name I assume most frequently while in my business” —can look back with pride on her secret career as a professional inquiry agent with a subtly shifting relationship to the Metropolitan Police. In “The Unknown Weapon,” her inquiries help the police discover who murdered young squire Graham Petleigh in his father’s manor house. In “The Judgment of Conscience,” she’s able to set the police straight about a lower-class romantic triangle that ends in tragedy. In “Tenant for Life,” her unofficial investigation, launched when she overhears a friend’s chance remark to her cabman husband about “Little Fourpenny Number Two way,” uncovers a plot to defraud the legal heir of a sizable estate. And her only role in the fact-based “A Child Found Dead: Murder Or No Murder” is to introduce a doctor friend who introduces his own childhood friend, Hardal, who does the sleuthing honors when a young boy taken from his bed is found dead nearby. “Georgy” ruefully recounts a blithe embezzler’s success in eluding both his conscience and any legal consequences of his theft. The most strikingly modern notes struck throughout all the stories, in fact, are Miss Gladden’s frequent failure to bring wrongdoers to justice and her regrets over the outcomes of her cases.

The creaking dialogue and halting, step-by-step-by-step deductions, which guarantee a glacial pace, will keep most of the curious at bay; this is no overlooked gem. But feminists and historical completists, the most likely readers to persevere, will find themselves amply rewarded by detective tales that more often focus on how and why than whodunit.