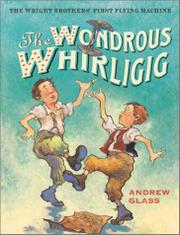 With his typically breezy illustrations, Glass puts a different spin on the story of the Wright brothers, recreating a childhood incident in the spirit of a folk tale. Told in Orville’s voice as a boy, he relates the time when their father brought home a whirligig and the “Big Bat” propelled the brothers’ interest into building their first flying machine. The telling and the art work go hand-in-hand, the narrative demonstrating both fondness and admiration for the two men and the sprightly pictures adding a humanizing touch. Glass makes a point to show the involvement of the whole family, especially Mrs. Wright and sister Kate. A one-page author’s note provides historical context and cites the sources from which he built his account. An inventive take-off on the boyhood lives of Willy and Orv, as they called each other, two curious and imaginative boys who became famous for launching aviation history. (Picture book/biography. 5-8)