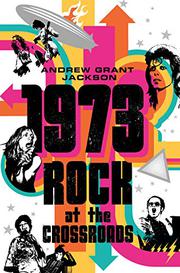 Rock at the Crossroads

An astute observer of popular culture takes a granular look at 12 months of music that reflected “the aftermath” of the preceding cultural revolution.

In a natural follow-up to 1965: The Most Revolutionary Year in Music (2015), Los Angeles–based music writer Jackson examines another pivotal year in popular music, when radio programmers figured out how to commodify “ ‘album-oriented rock’…[which] soon segregated rock from other genres that once spurred its evolution.” There’s all sorts of intriguing cross-pollination going on in the author’s rollicking retrospective of 1973, a year that some may consider unexceptional. However, Jackson’s expansive exploration obliterates such notions. On one hand, 1973 was a remarkable year for celebrated acts to produce some of their most seminal works, including Pink Floyd’s Dark Side of the Moon, Led Zeppelin’s Houses of the Holy, Elton John’s Goodbye Yellow Brick Road, The Who’s Quadrophenia, and Alice Cooper’s Billion Dollar Babies. On the other hand, 1973 was also an exceedingly fertile time for exciting new artists to burst on to the scene—Bruce Springsteen with Greetings From Asbury Park, N.J.—and for others to break away from the confines of their home countries and garner a more global audience (Bob Marley’s Catch a Fire). The title aside, Jackson demonstrates a determination to be musically inclusive. “Fifteen of the year’s nineteen No. 1 albums were rock albums,” writes the author. “In 2018, only eight out of the forty-one No. 1 albums were rock.” Though Jackson dives deep into AOR radio, he makes it clear that 1973 was also about outlaws Willie Nelson and Waylon Jennings upending the country music scene; superstars Stevie Wonder and Marvin Gaye revolutionizing the Motown sound; Linda Ronstadt and Joni Mitchell defying genre norms; and much more. As the year turned over, the top song in the country was Jim Croce’s “Time in a Bottle.” A month-by-month selected timeline helps readers situate the events discussed in the book.