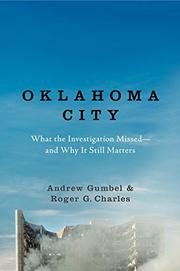 What the Investigation Missed--and Why It Still Matters

Journalists Gumbel (Steal This Vote: Dirty Elections and the Rotten History of Democracy in America, 2005, etc.) and Charles investigate the 1995 Oklahoma City bombing, uncovering failures in the official investigation and making a strong case for a larger conspiracy that fueled the attack.

In this minutely researched book, the authors take a multifaceted approach. Beginning days before the April 19 attack on the Murrah Federal Building in downtown Oklahoma City, the authors retrace the movements of the two men officially accused of the crime, Timothy McVeigh and Terry Nichols, as well as their known associates in radicalized militia communities scattered across the Midwest. Tracing the events of that day, the authors recount the series of miscalculations that led the bombers to switch targets, as well as hypothesize about the larger networks of discontented extremists who had long been threatening a response to the federal government’s bungled handling of the Waco situation. Gumbel and Charles balance their account of the perpetrators with multi-agency accounts from FEMA, the FBI, the ATF and local police and fire departments. By comparing these agency narratives, it becomes clear that many errors in the investigation were the product of miscommunication, territorialism and, in some cases, purposeful misrepresentations on the part of agents. The many voices of responders and investigators add to the voluminous cast of characters featured, from the ranks of extremist militia groups to the stalwart firefighters who treated the first victims. The authors deliver a compelling, articulate narrative history, thorough in both mainstream theories about the bombing and fringe conspiracy theories.

A valuable contribution to the larger study of terrorism in the United States.