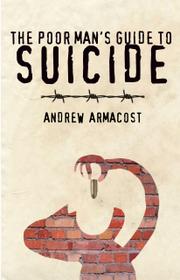 THE POOR MAN'S GUIDE TO SUICIDE

Armacost (Space Bush, 2012, etc.) ruminates on the banality of life in a frank but moving novel.

Wesley Weimer is having something like an end-of-life crisis. Years ago, he never envisioned the 33-year-old, twice-divorced, noncustodial father and prison guard he sees in the mirror each day. Now, his paltry salary from the Greenborough Correctional Facility goes to child support, and he barely maintains a tumbledown house. Time and income gaps have worn away the few friendships he had. Those “pointless minutiae that can bind human strangers”—politics, sports, books, music, cinema—seem to him mere distractions from the total insignificance of human life. So he decides to end his—or at least to hire someone to end it for him. In spite of his increasingly fatalistic outlook, it’s difficult not to sympathize with Wes. His confessional is spent less on self-pity than on understanding the decisions (and sparks of chance) that led him to this lot in life. He does so with wry humor and a surprising degree of wisdom. “I have this fantasy,” he says, “where I’m woven in a circle of friends who talk the way people talk over dinner in Woody Allen films, with that sublime witty banter and those heady insights into the crevices of life.” As it happens, Wes seems lifted right off the pages of an Allen script. From his description of an ex-wife—“I thought she would change over time but it would’ve been easier to move the Himalayas to Kansas with a spoon”—to a self-deprecating observation that there’s a distinct difference between a “good man” and a “good guy” and he’s the latter, Wes arrives at great truths, often without realizing it. By placing readers in his confidence, Wes establishes an emotional connection and makes a case for humanity’s predictability: We may be imperfect, even deluded, but our common fears, disappointments and tragedies unite us. “You’d never have a plot without a struggle,” someone tells him—true of this book and for the life Wes wants so desperately to extinguish.

A somber yet hopeful walk along the ledge.