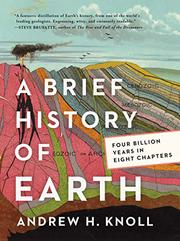 A BRIEF HISTORY OF EARTH

A geologist skillfully condenses the history of the Earth.

A Harvard professor of natural history and Earth and planetary sciences, Knoll begins when the Earth coalesced from dust and rocks circling the sun. Animals more complex than bacteria do not appear until the halfway point of the book, but few readers will complain. Good evidence for the Earth’s age did not appear until the 20th century, when measuring the decay of radioactive uranium revealed its age at 4.6 billion years. Rocks raining down generated enough heat to keep the Earth molten. By the time it cooled around 4 billion years ago, two substances we take for granted, water and oxygen, were missing. Water arrived from meteorites, which continue to fall, although less often than in previous millennia. Knoll engagingly recounts the theories of how life began along with the startling fact that evidence of microbial life appeared soon after the Earth cooled. It’s possible that life is not a lucky accident but inevitable once certain conditions are present. In the absence of oxygen, primitive organisms lived off alternate sources of energy such as sulfur or iron, which existed in the oceans and hot springs. More than 1 billion years passed before cyanobacteria evolved to extract energy from sunlight and water. This process of photosynthesis produced oxygen, leading eventually to the “Great Oxygenation Event” that marginalized older life forms but jump-started evolution because respiration using oxygen yields far more energy. After another 3 billion years, more complex organisms appeared. Early animals date from 500 million to 600 million years ago. Fish appeared at around 450 million years ago and began walking on land 100 million years later. In later chapters, Knoll speeds up the narrative but maintains a focus on geology as he proceeds through dinosaurs, mammals, continent migration, and catastrophic mass extinctions. Of course, the author’s study of humans dominates the closing section, which recounts hominid evolution and the dismal details of how we are making a mess of things.

An expert primer on the history of everything.