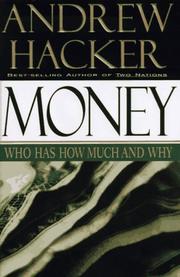 Who Has How Much and Why

Anecdotal audits of American assets and incomes that (like Wall Street's jest about economists laid end-to-end) never reaches a conclusion. Drawing on scores of secondary sources, Hacker (Political Science/Queens College; Two Nations, 1992, etc.) offers a hit-or- miss canvas of what well-paid, or at least well-regarded, US citizens make for working at various trades and their net worths. Inter alia, he provides selective data on the earning power of doctors, lawyers, and corporate chiefs, plus a host of other high- profile callings, including coaches of big-time college teams, film stars, school teachers, sports professionals, university professors. Conspicuous by their absence, however, are dentists, entrepreneurs (who, the author breezily asserts, can pay themselves anything they want), fashion models, songwriters, and tax collectors. Not too surprisingly, given the temper of the times, the top officers of publicly held enterprises are singled out for special, somewhat snide attention, in which the link of handsome pay packages to a company's success is breezily dismissed. Courtesy of Forbes magazine, the author also includes a briefing on what it takes to qualify for a list of the wealthiest Americans. Covered as well in no great depth are such hot topics as: the widening gap between the incomes of those on the upper and lower rungs of the socioeconomic ladder; the persistent disparity between the earnings of blacks and whites, men and women, and immigrants and native- born; and the author's calculations of what constitutes a living wage. All but ignored, by contrast, are the influences of credit, non-monetary motivations, and supply/demand forces on income. An academic's discontinuous and vaguely discontented survey of the way the money goes in latter-day America.