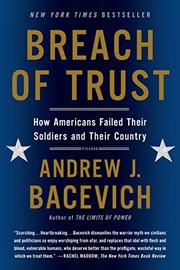 How Americans Failed Their Soldiers and Their Country

A former military officer and current professor assails the concept of the current all-volunteer Army and the general disconnect between the military and civilians.

Bacevich (History and International Relations/Boston Univ.; Washington Rules: America's Path to Permanent War, 2010, etc.) offers a subtitle that is more than a little misleading, suggesting as it does that his complaint is a general failure to “support our troops.” Instead, the author sees the widespread support-the-troops sentiments only as periodic feel-good moments for citizens who otherwise have nothing to do with the fighting and dying—and as crass opportunities for merchandisers. He takes us back to the anti-war sentiments fomented by the draft during the Vietnam War, noting that in our earlier wars, our practice had been to have an Army comprised of citizen-soldiers: everyone’s involved; everyone’s affected. No more. After 9/11, writes Bacevich, came the “great decoupling”—it was then that President George W. Bush told us to go on shopping and living as if we were not at war. The author notes the current widespread apathy about our armed conflicts. After some sections dealing with the Cold War and its aftermath, Bacevich blasts our moves in the Middle East and our outsourcing of military functions to private contractors (who, he notes, have made vast fortunes). He writes with deep skepticism about our declarations of “victory” in Iraq and Afghanistan, where a World War II–type conclusion is impossible. He goes after some individuals, too; among them is Gen. Stanley McChrystal, whose understanding of the challenges in Afghanistan, Bacevich claims, were “spectacularly arrogant or stunningly obtuse.” The author argues that the current system benefits only those in power and that the national security state does little but enrich some people and keep them in power. He deals with topics ranging from Israel to drone strikes, and he ends by advocating public service for all.

A mixture of passion, dismay and cynicism, with streaks of perhaps hopeless hope.