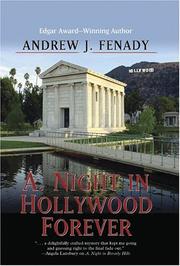 A. NIGHT IN HOLLYWOOD FOREVER

Veteran TV writer-producer Fenady (The Man with Bogart’s Face, 1976, etc.) returns with an inside-Hollywood mystery that’s all inside and no mystery.

Private-eye Alex Night just wants to hang up his .38 and stare all day at a sheet of typing paper that’s blank except for the title, “The Big Changeover,” but people keep throwing money at him to act like a shamus. Tri-Arc studio exec Mike Meadows offers him $5,000 to escort Night’s ex-lover Frances Vale and her diamond necklace, The Star of Good Hope, to the premiere of the film that’ll win her an Oscar if a thief doesn’t kill her first. Washed-up reporter Charles Oliver Dash wants him to help track down The Tear of Russia, a Fabergé egg last seen in the possession of Marion Davies, the chorine who owed her acting career to smitten publisher William Randolph Hearst. A couple of come-hither beauties offer him substantial cash bribes in side agreements, with one offering to sweeten the pot with something more personal. Night’s free to entertain every offer since his fiancée, hardboiled novelist Goldie Rose, has conveniently disappeared under suspicious circumstances. There’ll be threats, gunplay and two pilgrimages to a fabled Hollywood cemetery in search of the ultimate egg. But most of it makes no sense, and none of it matters.

As for the writing—well, as Night says, “It all happened fast—just like on MTV.”