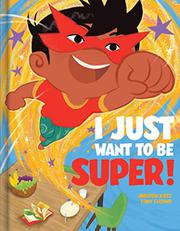 I JUST WANT TO BE SUPER!

After gaining superpowers, Nino discovers what it really means to be super.

When Nino tries on a superhero mask, he gains superpowers, suddenly soaring above the kitchen floor. When he tries to show Papa, he is told to put away his dishes. Nino uses his powers to put them away “SUPER style,” even though he doesn’t want to. And before he can use his superpowers to make art with his sister, Mama tells him to get dressed. “So he SHAZAMMED into his shirt and shorts.” Throughout the day, Nino wants to use his powers for fun, but someone always diverts him. Finally, Nino loses his temper at the park because his father won’t let him use his powers to throw a huge rock. When Nino faces a monster that has captured his cat, he discovers other ways to be super. Nino and his superpowers capture a child’s energy and wild imagination even as his family demonstrates patience and reasonable boundary-setting. Nino’s adventure, which kids can read as literal or imaginary as they will, shows that there are many different ways to be super, like showing empathy, helping others, making new friends, and being gentle. Nino’s character will resonate with kids, capturing a child’s perspective and emotions well. The appealing illustrations are fun and bold, exuding the super energy of the text, and present the whole family with brown skin and straight, black hair.

A super story for anyone who wants to be a superhero.