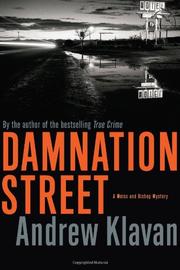 A private eye obsessed with rescuing a beautiful prostitute from a contract killer feels the hitman’s breath over his shoulder as he tracks her down.

When you take money for sex, you can’t pick your lovers, and Julie Wyant is reminded of that after an encounter with John Foy, aka the Shadowman. After a single night as blissful for him as it is excruciating for her, he promises to return and make her his forever. So she hightails it out of San Francisco, pausing only long enough to beg Scott Weiss, peerless finder of lost souls, not to find her. Weiss soon learns that Julie’s been unlucky with men since childhood. When she was 13, her father beat her mother to death and hid so successfully that the cops are still looking for him. Despite her plea, Weiss is certain that the only way he can protect her from the Shadowman is to find her first, even though he’s equally certain the killer will be dogging his every move. Klavan counterpoints this game of cat-and-cat with the tales of Weiss operative Jim Bishop, a loose cannon who just can’t stay out of trouble, and the anonymous narrator, a Weiss menial who’s hired by a clueless Berkeley professor to spy on his daughter, Emma McNair, the girl the narrator left behind.

Klavan’s tenth (Man and Wife, 2001, etc.) is a violent, sentimental comic book without the drawings.