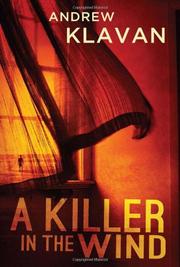 A KILLER IN THE WIND

Dan Champion is a disgraced NYPD vice cop whose successful handling of an evil child-sex-trade operation was compromised by his pumping five bullets into a prime suspect while on powerful hallucinogens. Now working as a small-town detective, he is revisited by the case via ghosts, including that of a beguiling mystery woman who warns him to run for his life.

At least Champion thinks they're ghosts. What starts out as a supernatural mystery turns into a chilling noir rooted in heightened realism when, spurred by his long-suffering girlfriend, Champion investigates repressed traumas in his own past. He was an orphan "adopted" along with other 6-year-olds by the infamous Fat Woman and headed for a terrible end. So powerful is Z, the drug he takes to recover mental images crucial to his investigation, that he spends a stretch of time not knowing whether what he's seeing is real or imagined. Does there really exist this enormous blob of womanhood without a face? Did he ever know and fall in love with Samantha, the purest embodiment of love? And what about the skeleton-faced killer with the spine-tingling promises to subject Champion to a permanent state of torture? Streaked with violence and gloom, this stand-alone, from the author of the Weiss and Bishop series (Damnation Street, 2006, etc.) and the youth-oriented Homelanders series, evokes the gritty classics of Cornell Woolrich and Jim Thompson while spinning its own brand of hard-boiled psychological suspense.

Among its other distinctions, this book gives us a detective who is tough enough to outlast the most bizarre encounters but isn't too tough to be gripped with fear.