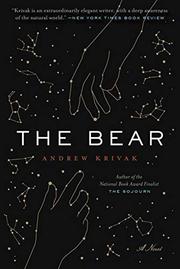 A moving post-apocalyptic fable for grown-ups.

We’re not entirely sure why it is that an unnamed man and his unnamed daughter are an endangered species, but we do know, after the man dies, that the animals call her “the last one.” Before his demise, the man teaches his daughter how to hunt, make snowshoes and arrows, comprehend the ways of the trees and the seasons in their mountain stronghold; they read “poetry from poets with strange names like Homer and Virgil, Hilda Doolittle and Wendell Berry, poems about gods and men and the wars between them, the beauty of small things, and peace,” and they talk night and day about the things that matter. Krivak (The Signal Flame, 2017, etc.) delivers no small amount of poetry himself in what might have been a cloying exercise in anthropomorphism, for once the preteen daughter is alone, a noble-minded bear takes care of her, avoiding “the place of the walls” where humans once dwelled in favor of alpine lakes and, in winter, a remote cave. A puma joins in the adventure to provide food while the bear sleeps, assuring her that she will become part of a story “for the forest to remember for as long as there is forest beneath the sun.” Part of the girl’s task is to bury her father on the distant mountaintop next to her mother’s grave, then, as the years pass, to honor them, “a girl no longer, though forever their child.“ A literary rejoinder of sorts to Alan Weisman’s The World Without Us (2007), Krivak’s slender story assures us that even without humans, the world will endure: The bears and mountain lions will come into their own in a world of buckled roofs and “ruined books,” and they themselves will tell stories under the light of the Great Bear. That’s small comfort to some humans, no doubt, but it makes for a splendid thought exercise and a lovely fable-cum-novel.