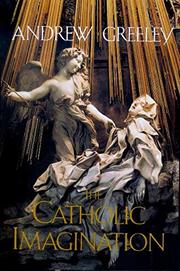 Greeley, the controversial Catholic sociologist who moonlights as a popular novelist (see Irish Eyes, above), offers a slender

investigation of the Catholic imagination. We are soon presented with a dichotomy between what Greeley claims to be demonstrating about the Catholic imagination and what he actually accomplishes. He would have us believe he has set out to illuminate the deep religious sensibility that votive candles, stained-glass windows, vestments, and incense only hint at—a sensibility Greeley calls "sacramental" (because Catholics see all "created reality" as revealing "the presence of God"). What Greeley in fact provides is not nearly so grand: in a handful of essays on loosely related themes, he examines various Catholic subjects, such as sacred time and salvation. In one chapter, Greeley explores the idea of how the Virgin Mary embodies the maternal aspects of God and suggests that American Catholics tend to have a very positive view of her. (An added tidbit: married couples who are gung-ho about the Virgin Mary also tend to say they are very sexually fulfilled.) In later chapters Greeley considers the role of hierarchy and community in the Catholic imagination. Catholicism, he states, is an intensely communal religion—but it is one where communities are organized hierarchically (although Greeley prefers the less threatening word structure to hierarchy). Nevertheless, Catholics are not simply taking their marching orders from Rome—according to Greeley, the local parish priest is the authority figure to whom most Catholics look. The second chapter features a refreshing discussion of the erotic aspects of religious art. Drawing on the Song of Songs, the writings of Saint John of the Cross and Teresa of Avila, and the Book of Tobit, Greeley urges Catholics—and Protestants—to consider erotic art as "quite necessary to a Christian worldview." Other findings, however—like Greeley’s musings on the relationship between church attendance and fine-arts consumption—should be viewed with suspicion. In the end, the book fails to hang together.

Each essay is interesting enough, but taken as a whole they do not live up to the title.