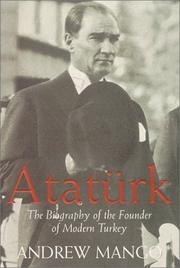 The Biography of the Founder of Modern Turkey

to piece together a substantial biography of the father of modern Turkey. The "Young Turk" Mustafa Kemal Ataturk rose to prominence fighting the Allies in WWI, distinguishing himself at Gallipoli and Syria and outpacing his rivals to take command of the armed forces. But it was his shrewd, patient politics that made him the savior of his defeated country, as he pitted the overextended Allied occupiers against themselves and eventually drove out the French, the British, the tenacious Italians, and—worst of all from the Turkish point of view—the Greeks. Under Ataturk’s direction, the moribund Ottoman Empire (which in the 17th century had extended to the very gates of Vienna but by the outbreak of WWI was renowned as the "Sick Man of Europe") gave way to a modern parliamentary state. Ruthless, certainly, and vain (but also logical, idealistic, and visionary), Ataturk took steps to revive a war-ravaged economy, consolidated his decimated military, extended suffrage to women, and advocated the equal treatment under the law of Greek and Jewish minorities. Though Turkey is heavily Islamic, he insisted upon the separation of church and state. In his revolutionary zeal Ataturk sometimes brought to mind the excesses of the French Revolution—he banned fezzes and turbans, for instance, and mandated the adoption of European-style hats—but he modernized and stabilized Turkey, and there is an active cult devoted to him among his countrymen today. Mango barrages the reader with details, yet he is never dry. He paints an admiring portrait of a political genius and, in the process, goes a long way in explaining why history has caused Greeks to hate Turks, Turks to hate Greeks, and the citizens of

Bosnia-Herzegovina to hate just about everybody.