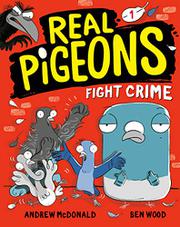 From the Real Pigeons series, volume 1

When crime rears its ugly head, who better than pigeons to have on your side?

Rock Pigeon loves nature and dressing up—as other birds, animals, even vegetation. He’s a master of disguise, and that’s why Grandpouter Pigeon flies from the city to the farm where Rock lives to recruit him to join a crime-fighting pigeon team. Rock Pigeon joins Tumbler, Homing, and Frillback, pigeons who each have their own special talent to apply to their first case: Where have all the breadcrumbs in the park gone?! The crime fighters stage a stakeout. Rock disguises himself as a bag of chips. Frillback uses super strength to create a pile of acorns to hide in. Tumbler’s ultraflexibility makes hiding in a crack easy, and Homing…well, Homing takes a nap. Eventually they realize there are no animals or, more importantly from the breadcrumb standpoint, humans in the park. Though the humans are still buying bread at a nearby bakery, both humans and animals think the park may be haunted. What haunts the park? It’s terrifying (and foolish). This series opener from an Australian author-and-illustrator team (three others are already out Down Under) is a goofball farce, Wood’s line drawings visually amping up the slapstick. Following the breadcrumbs mystery, this episodic volume offers two other cases for the crime-busting birdies, and young readers will make quick work of them all.