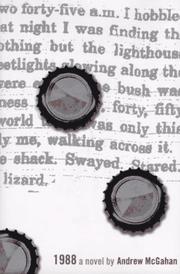 The latest entry in the Gen-X slacker sweepstakes comes from Australia, and adds an appropriate down-under twist to the familiar Gen-X fondness for doing nothing and writing about it. The title refers to the year of Australia's Bicentennial, a much hyped event that would of course turn a young man's fancy to rebellion. In '80s terms, rebellion means retreating into apathy and oblivion. The narrator of this angst-filled saga is Gordon Buchanan (also the protagonist of McGahan's first novel, Praise, 1993), a college dropout and would-be writer who lumbers along in Brisbane as a barman living in a crumbling house with lots of Chinese exchange students. He suffers, naturally, from ``a weakness of character, a poor diet, and alcohol.'' No surprise, given his low-energy existence and his sexual confusion—all de rigueur in the slacker profile. Things move along (sort of) when Gordon accepts the offer of an acquaintance to accompany him for six months to the outback. Together, they'll man a weather station in the remote North country, where their only companions will be a drunk and bitter Park Ranger, a dog, and a couple of resentful Aborigines, who now control the land. Completely unprepared for the profound isolation of Cape Don, Gordon and his buddy, Wayne, an aspiring artist, assume they'll take the opportunity to get creative. Instead, they drink, smoke pot, screw up their simple job responsibilities, and, of course, grow to hate each other. Then a week alone on the Cape pushes Gordon close to madness. A visit from a ranger who truly appreciates the wonders of remote Australia reminds the two Brisbane boys of what serious losers they are. This anti-romance of the road and of primitive culture suffers from the obvious problems of re-creating boredom—how do you do it without being boring? What's acclaimed as a fresh voice from down under sounds woefully stale up here.